Presented by Citi and sponsored by The Grove and Caruso, earlier today the T.J. Martell Foundation hosted its sold out 10th Annual LA Family Day at The Grove where exclusive live performances were given by Atlantic Records’ artist and current Dancing with the Stars contestant Ally Brooke, Nickelodeon pop star & teen sensation JoJo Siwa and Hollywood Records recording artist, dancer and actor featured in “The Lion King” JD McCrary.  The three-hour outdoor event was hosted by Nickelodeon’s “All That” star Josh Server and attracted over 400 adults and children for a day of fun to raise money for the foundation’s cancer research programs at Children’s Hospital Los Angeles. Celebrities in attendance included Debbie Gibson, Mary Wilson, Rachael Leigh Cooke, Dance Moms star Abby Lee Miller, the cast of Nickelodeon’s All That, Netflix’s Tall Girl star Ava Michelle and many more. 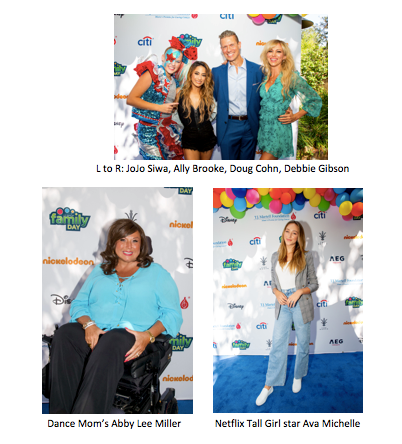 Attendees were able to decorate their very own Duff’s Cake Mix special treat, explore a virtual reality experience, climb a Velcro-wall, participate in various carnival-like activities from face painting, balloon darts and more, along with a JoJo Glam station and a photo booth extravaganza. The buffet lunch was catered by Umami Burger with snacks ranging from Wetzel’s Pretzels, popcorn and cotton candy and healthy treats from Gogo squeeZ and Hint water and more. Honorees for this year’s annual event were:

These industry leaders were honored for their charitable contributions throughout their career and were presented with awards as a thank you for their efforts.

Additional memorable and colorful moments throughout the event included:

About The Grove
Developed by Caruso in 2002, The Grove is one of the country’s most acclaimed shopping, dining and lifestyle destinations, offering the best mix of retail, restaurants and entertainment in Southern California.  Set on 20 acres adjacent to the historic Original Farmers Market in Los Angeles, The Grove offers a welcoming park-like setting with a vibrant pedestrian streetscape and first-class retail experience that successfully marries hometown charm with high-end shopping. This unique mix has earned The Grove recognition as the heart of the city – a “see and be seen” destination, a neighborhood gem and a community all its own. The Grove’s award-winning design, first-class Concierge service and community-like ambiance have garnered numerous awards and recognition throughout the retail industry, including being named the “#1 Shopping Destination in Los Angeles” by TripAdvisor, and ranking #2 of Fortune’s “10 Highest Sales-Generating Shopping Centers” in the country. The Grove also tops Shopping Center Today’s list of top 10 shopping centers in the world based on sales per square foot. For more information, please visit The Grove at www.TheGroveLA.com or on Instagram @TheGroveLA.

Katrina Cain Drops Powerful Anthem “How Did We Get Here?”