Walk Off the Earth Drops HERE WE GO! Album

CLICK HERE to listen and HERE to purchase a physical copy. 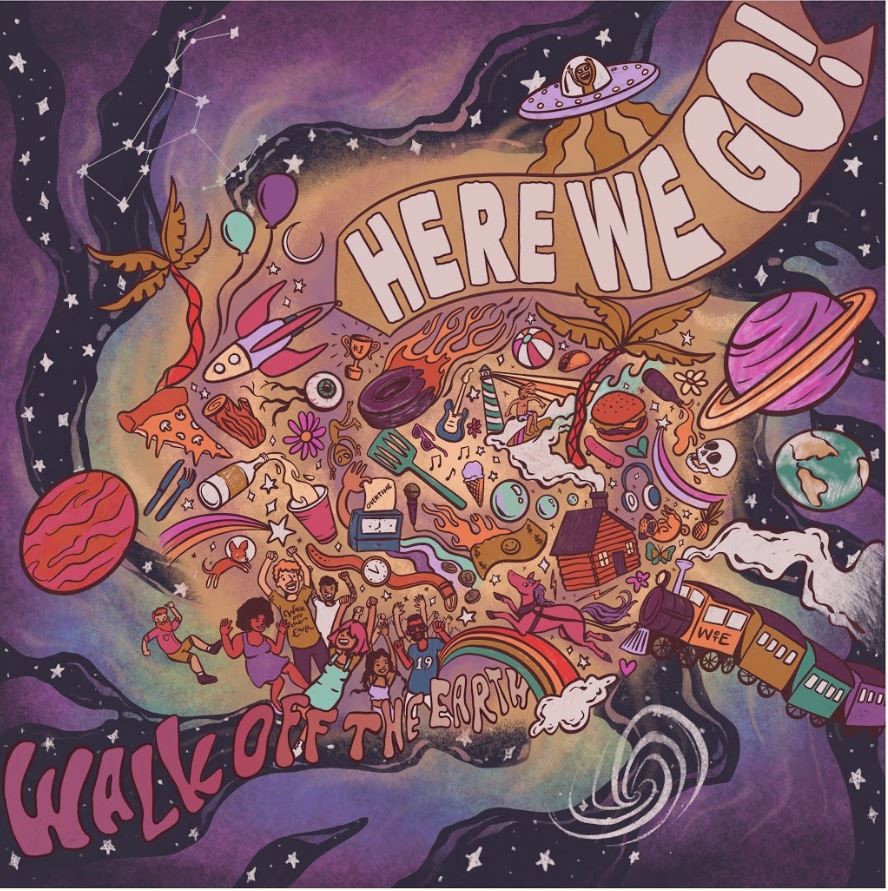 HERE WE GO! marks the band’s first major release in over 4 years and since the unexpected loss of band member Mike “Beard Guy” Taylor late last year. The album features the band’s current hit single “I’ll Be There,” which has become a streaming sensation worldwide. Hailed as a “catchy, uplifting, engaging track” (Forbes) and “Exceptional… ‘I’ll Be There’ is the group’s spiritual return to life” (Entertainment Weekly), the single hit #1 on Apple Music’s Breaking Pop playlist and is currently in the Top 5 of their massive A-List Pop playlist, as well as making its way up the Hot AC and Top 40 radio charts in the U.S. and Canada.

On their new album, Walk Off the Earth shares, “HERE WE GO! is a collection of songs about life, love, loss and straight-up kicking ass. Ranging from top 40 pop to organic folk ballads to EDM rise and drops, this eclectic album touches on many modern genres but still stays true to Walk Off the Earth’s signature sound.”

Fresh off their televised NBA Game 4 national anthem performance and headline appearances at Red Rocks Amphitheater and Wembley Arena earlier this summer, Walk Off the Earth launched HERE WE GO! in May with the heartfelt original single “Mike’s Song” that helped raise thousands for MusiCounts-Canada’s music education charity associated with the Juno Awards-in honor of former bandmate Mike Taylor. The band continues to tour extensively and will play a slew of dates in their native Canada this fall and will return to Australia in January 2020 for a series of spectacular performances, including a show at the iconic Sydney Opera House.

About Walk Off the Earth
Juno Award-winning and multi-platinum phenomenon, Walk Off the Earth, is currently taking the world by storm. Based just outside of Toronto, the band gained worldwide attention with their brilliant 5-people-playing-one-guitar interpretation of Gotye’s “Somebody That I Used to Know” exploded on YouTube, garnering over 187 million views. Since then, the band has released a string of successful original songs including, “Red Hands” (#1 at AAA), “Fire In My Soul” and “Rule The World” (multi-platinum in Canada); sold out venues across the globe, from Red Rocks to Wembley, and collaborated with some of the biggest artists in the world including Keith Urban, Snoop Dogg, Nicky Romero, and Steve Aoki.  In 2018, the band won a Streamy Award for Best Cover Song with their interpretation of Maroon 5’s “Girls Like You.” They also released a holiday EP, Subscribe to the Holidays, that charted as the #1 independent release in Canada for the last week of November.

Late last year, the band faced a major and unexpected loss with the sudden death of band member Mike “Beard Guy” Taylor. Mike’s incredible ability behind the keys gave the band a sturdy foundation to soar and create. In the wake of Mike’s passing, and with much difficult consideration, the band decided to move forward and use their platform to honor and share the extraordinary legacy he left behind.

The continued chemistry between band members Gianni, Sarah, Joel, and Marshall is undeniable. With Joel’s driving and prolific percussion work and Gianni, Sarah, and Marshall’s captivating vocal styling and melodic arrangements, 2019 continues to be a year full of new music with the release of the band’s highly anticipated fifth studio album HERE WE GO! available now via Golden Carrot Records/The Orchard. Walk Off the Earth’s independent spirit, unstoppable work ethic, and awe-inspiring creativity have catapulted the band to new and uncharted waters with only bigger and better things on the horizon.

CLICK HERE to stream Walk Off the Earth’s new album HERE WE GO!

Listen to HERE WE GO!