Nashville-based, alt-country/roots rockers, Flying Buffaloes, continue to gather force for their debut album project, LOADED & ROLLIN’, with the PREMIERE of the official music video for “Loaded & Rollin'” to air EXCLUSIVELY on Twangville this Wednesday, February 5 at 8 p.m. Central/6 p.m. Pacific.

“Loaded & Rollin'” is the title track from Flying Buffaloes’ full-length, debut album released independently late last year which has earned well over 54,000 streams and counting. The title single portrays the common struggle of artists who are required to break societal norms in order to pursue a career in music.

“If you have ever had to make the choice between adhering to the status quo or feeding your soul, then you know what this song is about,” states Barry Stone. “Its about being able to acknowledge who I was at my core, and the difficulty of having to step away from the safety of a steady paycheck and job security, and sometimes having to reject the advice and common sense of my peers to transform myself from an uninspired part-time employee in Dayton, OH to full-time musician,” he explains. “Overcoming those doubts and using the fear that someday I would regret not following my heart were excellent motivators, but it will certainly be one of the most challenging obstacles I will ever have to face.”

The performance-based video provides a glimpse of the behind-the-scenes work and antics that occur as Flying Buffaloes hit the road and gives audiences a taste of their high-octane live shows. Check out the video teaser: 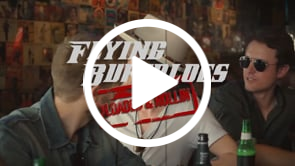 Recorded at Battle Tapes Studio in East Nashville by Grammy award-winning engineer/mixer/producer Jeremy Ferguson (Cage the Elephant/Steelism/Andrew Combs), Loaded & Rollin’ harkens to classic rock and outlaw country albums of the 1970s and is a deeply personal album, with 11 original tracks penned by the band. The album is unabashedly autobiographical and explores the isolation and depression associated with immigration, the ups-and-downs of love, relationships, and captures the essence of what it means to be a working Nashville band.

The official music video for the title track is the third music video generated from the album. Previous videos include “Lonesome Cowboy” (a full-throttle rock tune driven by wailing blues harmonica and delta-blues slide guitar licks) that highlights the musical skills of group, and “Up Here I’m Found,” which spoofs those extremely annoying pharmaceutical commercials while tackling the song’s dark subject matter of a man struggling with depression.

Flying Buffaloes first found themselves in the national spotlight in 2017 with attention from Huffington Post for their extremely creative debut video, “Hey 😉 is for Horses” and for being the first group to film and release an entire official music video in an interactive 360°HD format. In 2018, they turned heads again with an official video shot entirely in Instagram with their single, “Day by Day.” In 2019, they released a deeply poignant video, “Germany Turnaround,” that recounts the real-life turmoil of one of the Buffaloes’ front men, Johan Stone, a native of Germany, who battled immigration issues to stay in the States to pursue his career of music with Flying Buffaloes.

Flying Buffaloes embarked on their national tour last week in support of the album and are quickly earning fans across the country.