Tweet
Pin it
After a wildly successful Kickstarter residence and campaign in Fall 2019, recording and performing artist José María is ready to share their LQQK visual EP with the world. The project features six tracks that explore the concept of gender, toxic masculinity, and transformation.
“Each track has its own music video where I progress from James Dean into a non-binary Mondrian,” says José. The LQQK EP takes a deep dive into society’s ideas about masculinity, turning the concept on its head.

“I’ve always loved pop music. For a long time, I was scared to admit what I liked about female-driven pop and why. And then I finally asked myself: why can’t I be a pop princess? Who made the rules for how someone has to write? Think? Act? Why can’t I wear heels with my f***ing Carhart jacket while I lay a pipe? If Joan Jett could subvert and thus empower femmes and feminity, then I sure as hell can claim my sexuality and power by embracing the fullness of my non-binary identity.”

Indeed, the opening track, “EDEN,” opens with the artist sporting a rockabilly pompadour, white T-shirt with rolled-up sleeves, and black jeans – all accentuated with killer stiletto-heeled Pleaser boots. The song opens with a haunting six-part harmony before exploding into an alt rock groove set over a pounding beat.
Later tracks such as “BODY” find José in a colorful bodysuit and makeup, joined by Mãr Galeano and Ashton Muñiz. The catchy R&B-infused pop track muses on life, the future, and the inevitability of change. All of the music for the album was written by José, along with Cesar Gonzalez, Alexander Ronneburg, and Karl Ronneburg. The six part music video series was filmed by the queer femme savants at Proteo Media + Performance.
Watch the official video for “BODY” below: 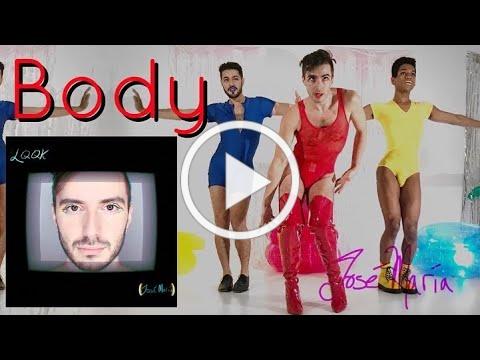 “The music is earnest and sexy – stuff you shout-sing along to in your mom’s car,” José continues. “Our sound is inspired by the intersection of noise and new music with pop vocals, with SOPHIE, Tristan Perich, Meredith Monk, and Queen as references – I sing from my gut.”
It’s not José’s first foray into the intersection of music and visual art. Born in the Bronx to a working-class, Puerto Rican/Italian American family, José started singing and writing as a small child. They had entered the world of contemporary and postmodern dance at 18 when they were accepted into the NYU Tisch School of the Arts on a full ride MLK Jr. Merit Scholarship. At 21, José created their first “musical painting” that incorporated camera, dance, fashion, music, and performance to tell a universal story – and they’ve never looked back since.
José has showcased their work via YouTube, Radio City Music Hall, La MaMa ETC., NYU Tisch, and The Flea Theater. They have been featured in The Advocate , on Logo NewNowNext, and WNYC/NPR. Recent projects with artists Sam Pinkleton, Ani Taj/Dance Cartel, Meredith Monk, The B52s, YouTube’s Queer Kid Stuff, and some fabulous early covers are available online.
Stream or buy the LQQK visual EP here.
Find José María at www.joseishere.com and @joseishere on Instagram.