Produced by Luke Wooten and recorded at Station West Studios in Nashville, Tenn. and at Smecky Studios in Prague, the Czech Republic with the City of Prague Philharmonic Orchestra, the instrumentation of My Name Is Christmas is a lively mix, filled with nostalgic touches and sentimentality. To help bring the Christmas spirit alive, and making the release extra special, Scovill called on some of his closest musical friends, Lindsay Ell (“Snow Day”), Brad Paisley (“Here Comes Santa Claus”), and popular Norwegian singer/songwriter Hanne Sørvaag (“My Name Is Christmas”), among others, to collaborate on the project. 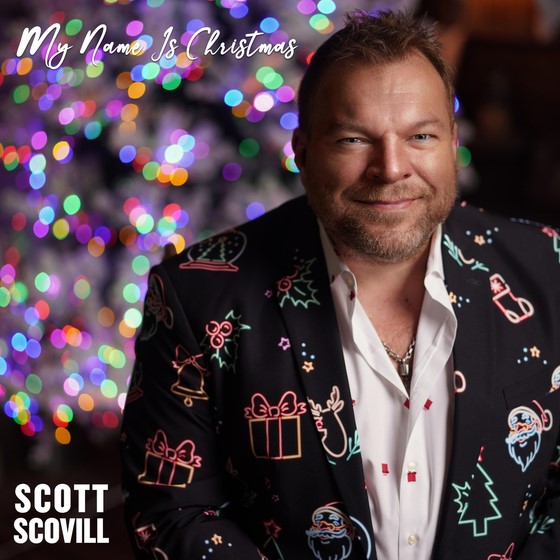 Sentimental memories of love and giving instilled from his parents is what inspired Scovill to record a holiday album saying, “Christmas is love. It’s a holiday with so much giving. My parents instilled the importance of giving in to me, and it took.” The joy of the season, coupled with the warmth he feels when listening to holiday classics from Nat King Cole, Frank Sinatra, and Burl Ives, as well as recent releases from Brad Paisley, helped him envision the creation of My Name is Christmas. “If the best gifts come from the heart and are personal then this certainly qualifies,” Scovill says of the new album.

One of the album’s standouts is the title track, which is written from the unique perspective of “what would Christmas have to say?”  Scovill commented about the song saying, “My goal was to write a new Christmas song that would sound like a classic. It would have a classic vibe, use a full orchestra, be breathy, have range, and would set me crooning. I enlisted Madeline Stone, who I have truly connected with as a co-writer, and we set to work. We made it a conversation between a girl who loves Christmas, and Christmas itself. For us, it fell together and felt magical. With Hanne Sorvaag’s beautiful vocals, it became better than I could have ever imagined.”

Scott Scovill has always possessed a strong passion for music. Recently, Scovill took his love for creating and performing music from his typical ‘behind the scenes’ roles to the stage. Getting his start as an international performing artist with the Norway-based band, Spinning Wheels, Scovill developed an even stronger love for music and performing. During his run of shows with the group throughout Norway, Scovill had the opportunity to open for Country icon Brad Paisley, making it his second time opening for the legendary hitmaker. Following his international tour, Scovill returned to the United States where he performed shows in Nashville and Chicago. He looks forward to continued writing, recording and performing his music for fans both locally and internationally.

My Name Is Christmas Track Listing:

Sam Grow’s “Me And Mine” EP Coming October 30th