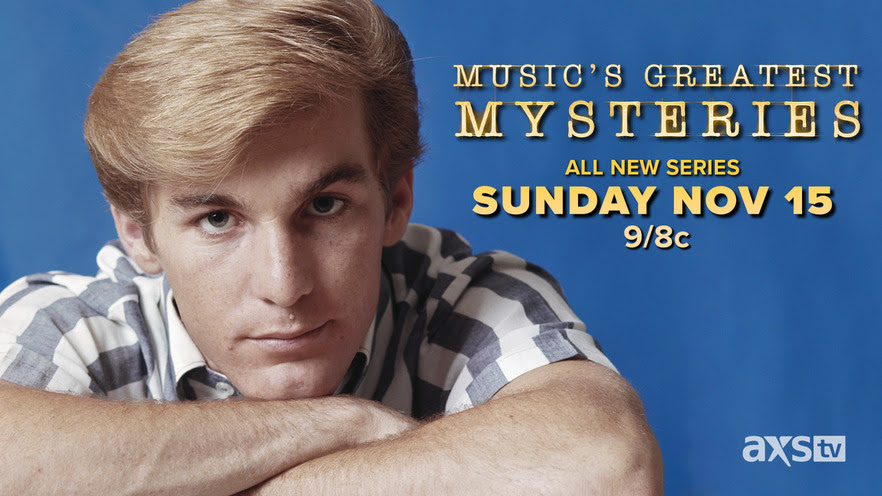 The premiere episode delves into the mysteries of…

*The Beach Boys’ Dennis Wilson and his relationship with serial killer Charlie Manson, seeking to answer if Wilson angered Manson during the summer of 1968.

*The second story looks at Post Malone’s infatuation with the occult and looks at the possibility that he may be cursed by the world’s most haunted object.

*And lastly, the show examines whether or not a failed audition saved Faith Hill’s life at the start of her career.

AXS TV if offering the premiere episode for review.

For more information on Music’s Greatest Mysteries, check out the descriptions below.

Spanning a wide variety of eras and genres—from Hip Hop and Rockabilly, to Country, Grunge, and everything in-between—Music’s Greatest Mysteries guides viewers on an immersive journey investigating the infamous myths and larger-than-life personalities which have come to define the music industry throughout the decades. Separating fact from fiction, Music’s Greatest Mysteries presents a fresh perspective on stories both well known and slightly more obscure, unearthing hidden gems and long-forgotten lore with the help of music icons and noted experts. Blending insightful commentary with rare archive footage, the series seeks to answer the “whys” and “hows” of each new topic until the whole truth is revealed. Not only are the themes meshed in history, but so are the interview locations. Legendary music venues such as The Bluebird Café in Nashville and Antone’s in Austin will be woven into the fabric of these stories.

Music’s Greatest Mysteries airs as part of the Network’s Sunday Night Rocks block, which also includes The Top Ten Revealed at 8 p.m. ET, Rock Legends at 8:30 p.m. ET and A Year In Music at 9:30 p.m. ET.

Other Episodic Themes Include:

Nov. 22 – CIA, Impersonator and Insult
Did the CIA kill Bob Marley? Is a doppelganger impersonating the real Avril Lavigne? What was the meaning behind Charlie Rich’s insult of John Denver?

Nov. 29 – Death, Rivalry and Warnings
What happened to Gram Parsons’ body after he died? Did Prince and Michael Jackson really hate each other? What’s the real story behind “Parental Advisory” warning labels?

Dec. 6 – Vicious, Kissed and Undercover
Did Sid Vicious’ mother play a part in his death? Is KISS a band or a brand? Is Jamie Hewlett of the Gorillaz really Banksy?

Dec. 13 – Satanic, Immortal and Narc
What’s the satanic truth behind playing records backwards? Does Aerosmith have nine lives? Was Elvis secretly a NARC for the Nixon administration?

Dec. 20 – Desperate, Dissed and Goddess
Were the rights to “Friends in Low Places” sold to settle a bar tab? Was “Sweet Home Alabama” the first diss track, meaning a song to attack another artist? What explains the mysteries that surround Stevie Nicks?

ABOUT Hideout Pictures
A division of Average Joes Entertainment, Hideout Pictures LLC began in 2010 producing music videos for such artists as Montgomery Gentry, Yelawolf, Billy Currington, Lee Brice, Colt Ford, The LACS and many more.  In 2015 Hideout expanded into feature film and television with the Sundance premiere for the Neil Hamburger vehicle, “Entertainment,” which sold to Magnolia Films and the CMT comedy “Still The King” which starred Billy Ray Cyrus and Joey Lauren Adams.  In 2018 Hideout established a film fund to both develop and invest in television and film projects. Recent releases include the eight-episode docudrama, “Howard’s Mill,” the Kate Walsh and Omar Epps Sci-fi thriller, “3022,” and Kevin Smith’s “Jay & Silent Bob: Reboot.”
ABOUT Texas Crew Productions (TCP)
Texas Crew Productions shoots and produces television content for clients around the world. TCP opened its doors 25-plus years ago as a crewing company for clients such as 60 Minutes, The Olympics on NBC, MTV, and the NFL Network, and has grown into a full-service production company that today has run hundreds of complex productions, bringing ideas from concept to network premiere and earning more than 20-Emmy Awards in the process. From documentary to reality to live TV, from long-form series and specials to branded content and music videos, TCP offers a wide variety of premium experiences in the production landscape. Some examples of work we’re most proud of includes: the NAACP Image Award-winning 2-HR Special The 44th President: In His Own Words, a first-person documentary special on President Obama’s presidency which aired on HISTORY; Esquire Network’s celebrated docu-series Friday Night Tykes; the Emmy-award winning Ironman World Championshipon NBC; ESPN 30 for 30’s Brian and the Boz and Phi Slama Jama; VH1’s ATL: The Untold Story of Atlanta’s Rise in the Rap Game; HISTORY’s 2-HR Special Alcatraz: Search For The Truth; Oxygen’s 6-part true crime series The Disappearance of Maura Murray; and Fox Sports’ Super Bowl feature on Texas Football.

“When Country Comes Back,” Colt Ford’s New Single and 41-Date Tour, Scheduled For Release May 28th