“No More Tears” was written by Jewel specifically for the seminal documentary Lost In America, which hits select theaters in 2020. The powerful feature is the first film to take a national in-depth look at the issue of youth homelessness in America, highlighting the main issues that surround it: sex trafficking, the failure of the foster care system, and the rampant rejection of LGBTQ youth. Directed by former homeless youth Rotimi Rainwater, Jewel serves as the film’s executive producer alongside Halle Berry, Rosario Dawson, and more. For more information on Lost In America, visit lostinamericafilm.com. 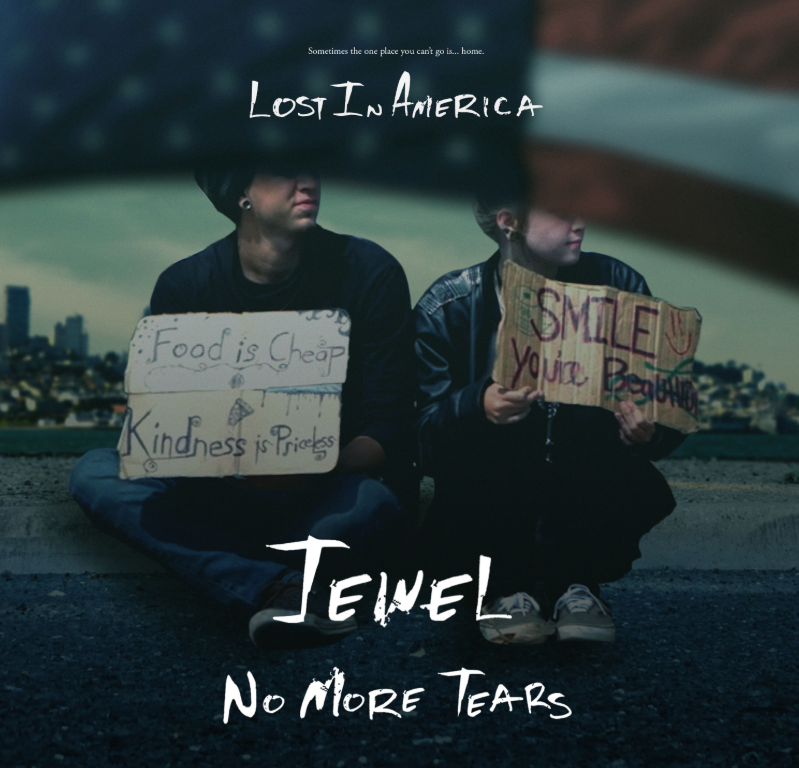 Jewel shares, “It’s been a tremendous honor to be an Executive Producer and to work on this film, Lost in America. It is a subject that is so dear to my heart. I was homeless for a year when I was 18 –I started living in my car because a boss withheld my pay check when I refused his sexual advances. When my car got stolen things got more difficult from there. The issue of homeless youth is important, misunderstood and overlooked. I was so moved as I was working on this film, that I was inspired to write a song for the youth I came to know through the process.  It was a transformative experience to see the film come together and to write this song and be able to record it. It’s all of our jobs to make sure that there are no more youth that are lost in America.”

“No More Tears” is only the first hint of a massive year ahead for Jewel, who will be celebrating 25 years of her iconic Diamond RIAA-certified debut album, Pieces of You, which remains one of the bestselling debuts of all time. Stay tuned for much more new music to come and be sure to keep an ear out for Jewel’s classic “Winter Wonderland” spinning everywhere this holiday season.

About Jewel
Jewel is a singer-songwriter, actress, author, mother and advocate. She went from a girl who grew up in Alaska with no running water, to a homeless teenager in San Diego, to an award-winning, multi-platinum recording artist who released one of the best-selling debuts of all time. Throughout her career, which has spanned over 20 years, she has earned multiple Grammy Award nominations, an American Music Award, and an MTV Video Music Award and has sold well in excess of 30 million albums worldwide to date.

Recently founding her own label imprint “Words Matter Media,” Jewel has inked a distribution and marketing deal with The Orchard (Sony), and is busy writing and recording songs for her next studio album due for release in early 2020 and coinciding with her Silver Anniversary – a celebration of 25 years as a hit-making recording artist.

“No More Tears” marks the first release from Jewel’s new label partnership. The song was written by Jewel specifically for the seminal documentary Lost In America, which hits select theaters in 2020. The powerful feature is the first film to take a national in-depth look at the issue of youth homelessness in America, highlighting the main issues that surround it: sex trafficking, the failure of the foster care system, and the rampant rejection of LGBTQ youth. Directed by former homeless youth Rotimi Rainwater, Jewel serves as the film’s executive producer alongside Halle Berry, Rosario Dawson, and more.

Jewel’s distinct story began on an Alaskan homestead when she started singing in bars at eight years old. She left home at fifteen and provided for herself until the age of sixteen when she received a partial scholarship to Interlochen Fine Arts Academy, which is where she began writing songs documenting her inner journey and the world she saw around her with lyrics that were considered artful and profound.

At age nineteen, after being discovered singing in a San Diego coffee shop, Jewel found herself in a bidding war between record companies wanting to sign her. Rather than take the largest advance, she bet on herself, making an aggressive back-end deal, which at that time was unheard of for an undiscovered artist.

Jewel credits her great mentors Bob Dylan and Neil Young who took the time to groom and encourage her as a young artist. Jewel’s debut album Pieces of You was released in 1995, recorded in a studio on Neil Young’s ranch, and included Young’s backing band, The Stray Gators. The album remained on the Billboard 200 Albums chart for two years and spawned Top 10 hits including the platinum-certified singles “You Were Meant for Me,” “Who Will Save Your Soul”, and “Foolish Games.” Described by Rolling Stone as “a record that carved out a perfectly confessional, coffeehouse niche between the decline of grunge and the rise of the slinky pop princess,” The album also reached mainstream success selling over 12 million copies and becoming certified 12x platinum.

Her second album, Spirit, released in 1998, showcased Jewel’s raw talent and heartfelt emotions she is best known for. “Jewel‘s best enjoyed live, when she can let her voice loose and allow it to run around…. you can’t deny what she does onstage. She has one of the most God-given voices I have ever heard an artist be given” states Rolling Stone. Spirit is certified 4x platinum and includes popular singles such as “Hands” which reached No. 6 on Billboard’s Hot 100.

In 2001, Jewel returned with the platinum-certified album This Way, which honed a more rock-pop sound and was frankly described by Rolling Stone as “rough and fun.” The album debuted at No. 2 on the Billboard 200 Albums Chart and featured the dance hit “Serve the Ego” that wowed the masses, scoring a No. 1 on the Billboard Hot Dance Club and leading the way to Jewel’s fourth studio album, 0304. Entertainment Weekly opined that the “unexpected dance-pop vibrancy (of 0304) makes it Jewel’s best album” and All Music agreed stating that “she puts herself out on the line more than she ever has, and she’s come up with her best record, with her best set of songs and best music yet.” The album featured hit single “Intuition” which became a Top 5 hit on Billboard‘s Hot 100.

Jewel’s versatile music career has spanned seven studio albums ranging in genre from pop, folk, and country, and has achieved 23 hit singles to date. The progression and variety of Jewel’s albums is due largely in part to mentor’s Bob Dylan and Neil Young who impressed upon her with their advice to take risks and make music she is authentically interested in. Jewel’s sophomore album Spirit showcased an entirely different feel than her debut album, Pieces of You. Rock-leaning, This Way, came next which then transitioned to the dance-pop that encompassed 0304. Next, Jewel explored country with beautiful lyrics and melody. She debuted #1 in the country charts with her first country effort. Always a story-teller, combining poetry and melody, Jewel’s body of work speaks for itself.

Her bold ability to not only span genre and medium, but have success in each of them are made possible by the consistent philosophic and poetic lyrical viewpoint which permeates everything she does.

Jewel defines herself as someone whose purpose is to serve as an emotionally honest mirror for society – never using art as propaganda to make herself or the world around her seem more or less perfect than it is. Authenticity is the hallmark of each piece of art she puts out. She credits this as the source of her longevity.

Jewel has appeared on the cover of numerous magazines including TIME and Rolling Stone, performed on Saturday Night Live, at the Super Bowl and NBA Finals, and for the Pope and President of the United States.She was recently chosen to finish Johnny Cash‘s half written songs for a posthumously released CD curated by Cash’s son, John Carter Cash.

In addition to singing and songwriting, Jewel is also a successful actress and made her film debut in Ang Lee’s 1999 civil war drama “Ride with the Devil.” She then went on to star in the lead role of June Carter Cash in the Lifetime original movie “Ring of Fire,” which was nominated for four Emmy Awards. In early 2017, Jewel became a producer and assumed the lead role of Shannon Hughes as an “intuitive contractor” on the hot franchise “The Fixer Upper Series” (based on the best-selling series of books of the same name) for Hallmark Movies and Mysteries. She is also an Executive Producer, and plays a significant role in the new Rotimi Rainwater-directed documentary “Lost in America” on youth homelessness.

As an author, Jewel became a best-selling poet with her book of poems A Night Without Armorand has penned three children’s books.  In 2015, Jewel released her memoir Never Broken: Songs Are Only Half the Story and it became a New York Times best seller.

For philanthropy, Jewel founded her Project Clean Water charity in 1997 and has brought clean water to 15 countries. She recently started the Never Broken Foundation and online program, and has partnered with the Inspiring Children Foundation to make mindfulness and emotional intelligence tools available to the masses for free. Jewel’s lifelong passion for her own personal growth and health is helping her to become the spokesperson of modern day wellness and mindfulness by sharing those same practices she’s used from the age of fourteen. Jewel’s “WHOLE HUMAN” philosophy is designed to help people gain tone and strength in all areas of their lives including emotional intelligence, physical and fiscal health, interpersonal relationships and nutrition, and most importantly as friends, associates, and contributors to society.