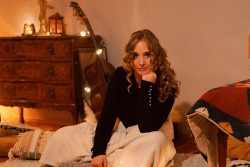 At the beginning of the Christmas season HENRIETTE starts her new cycle in the middle of the global pandemic, which she experiences as a creatively enriching time against all odds, with the acoustic ballad “Remember That”, to be released today on December 2nd, 2020, via Dr. Music Records and is probably her most personal song so far. A few months after the release of her first self-titled EP, celebrated by press and fans alike, the Country Pop vocalist commemorates her father, who passed away on Christmas 2017, and dedicates to him an emotionally melancholic homage with her new single “Remember That”. His musical affinity inspired her since childhood and ultimately led her to study music in Leipzig. Very attached to music, he always used to say: «Honey, no matter how bad things are and how sad you feel, sing! Afterward, the world will be better! » After he was gone, this message got stuck in her head like glue. When she told former Kacey Musgraves pedal steel player Adam Ollendorff (Katy Perry, Willy Nelson, Carrie Underwood) about it during their first songwriting session, they both decided to give this message its very own spot. “Remember That” tells the story about a very special love between father and daughter. It’s about childhood comfort, growing up, the high and lows, remembering and, most important, about letting go. Just the right song for a contemplative Christmas, which invites you with its video to a cozy trip into HENRIETTE’s past: https://youtu.be/b5W0zy_13Gw 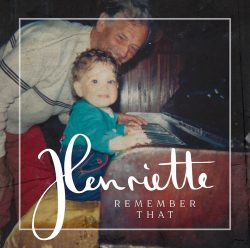 Numerous new songs have been written in the past months, some of them in video sessions across the ocean with songwriters from Nashville, but many of them also all alone, in an intimate lockdown atmosphere in her loft in Berlin. HENRIETTE does what she’s best at, music. Telling stories, reminisce, put the heard on paper and turn it into songs she hopes will touch and enrich others. This way, she continues to pave her way despite all the changes. The picture that the musician painted with her debut EP has now become noticeably more mature, more colorful and emotionally more courageous. The new songs expand the musical range, show previously undiscovered facets, dive deeper into her soul and take the listener on a journey into the American vastness, only to finally settle down again in his own heart. 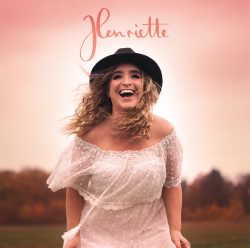 With her self-titled debut EP, released on Valentine’s Day 2020 via Dr. Music Records, the Berliner-by-choice has gained many new fans around the world. HENRIETTE produced the five tracks together with the two producers Jay Tooke, drummer of the legendary band The Steel Woods and James Robertson, well-known guitarist for e.g. Lindi Ortega and Dragonette, in Nashville. She already presented it live to a large audience as a support act for US Singer-Songwriter John Craigie and at the 10th International Country Music Meeting in early February. With her three singles released so far, the passionate, vivid “Crash Like This” as well as the successful, charming Indian Summer catchy tune “Dream Boy” and the melancholic “Lighthouse”, the German Country Pop shooting star made her mark on the radio last fall-winter. The EP also features the two previously unreleased songs “Missing You”, which HENRIETTE dedicated to her mother, who went through a hard time after the sudden death of her only brother, and “Fearless”, in which she processes the fears and doubts before her trip to Nashville. The self-titled debut EP is still available at these international record stores and digital services.

For the latest news of the Country Pop vocalist, we recommend a regular visit of HENRIETTE’s website www.henriette.one and her social media profiles at www.facebook.com/music.henriette and www.instagram.com/henriettemusic. Check also www.dr-music-promotion.de for more information about the musician and her new singles to be released in the coming months.

Journalists and radio editors, who want to start into the Christmas season with HENRIETTE’s music, should register directly in the VIP & Press Lounge of Dr. Music Promotion for the sampling with the promo download of the new single “Remember That” as well as for the upcoming new singles.